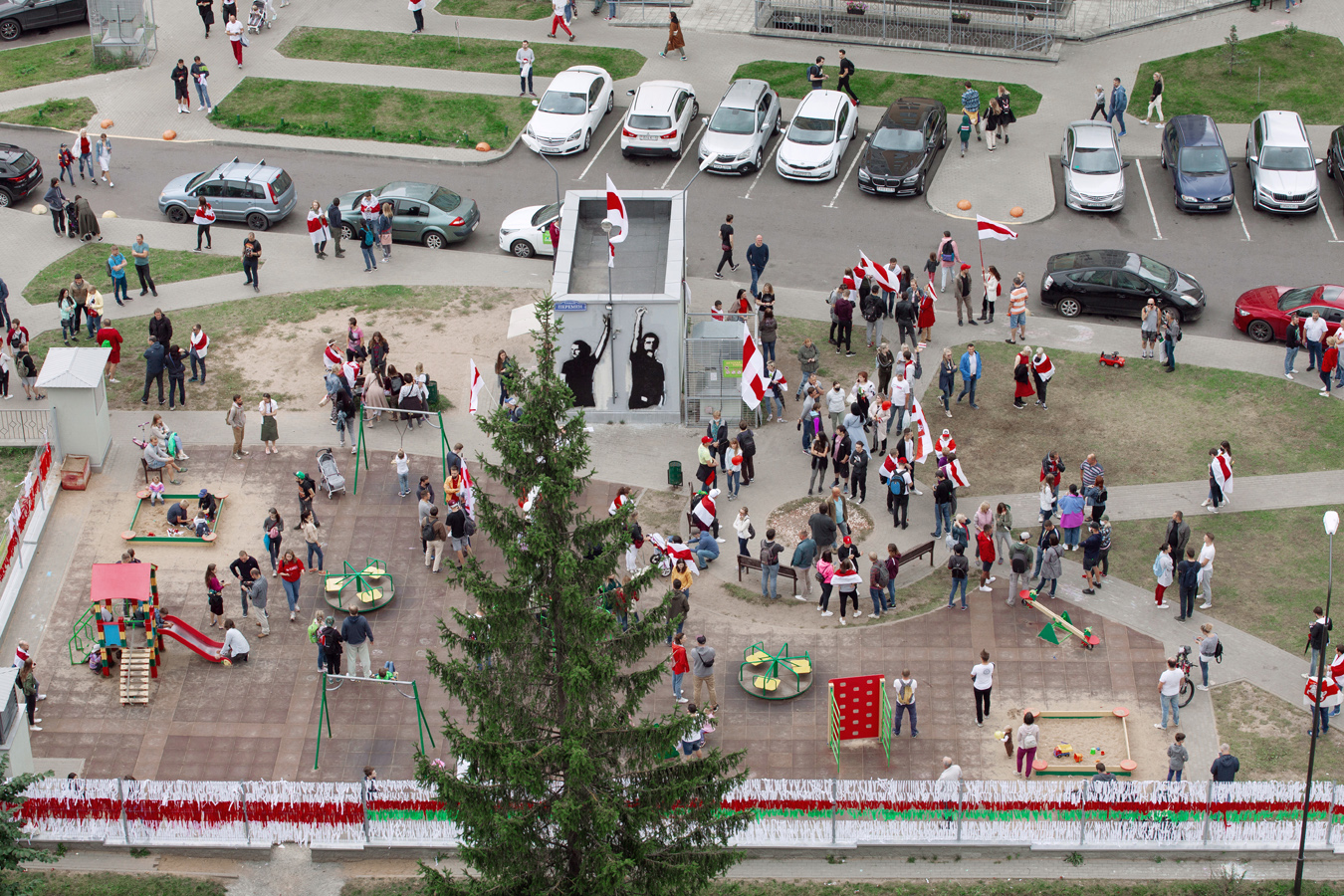 In Janis Rozentāls Square, next to the Latvian National Museum of Art, stands a model of a transformer cabin with photographs that were taken during 8 months of documenting the events in the Square of Change in Minsk – a place that became a symbol of Belarusian fight for their rights. On August 12, residents of the house on Chervyakov Street in Minsk attached to the transformer cabin a symbol of what was happening in Belarus – a poster with DJs of Change Uladzislau Sakalouski and Kiryl Halanau. The DJs played a song Changes by Viktor Tsoy at a rally that was organized by state officials so that on the eve of election day, August 9, Sviatlana Tsikhanouskaya could not meet with voters. This song has been a symbol of change for more than 30 years, and now it has become relevant again, especially for Belarusians. So much so that during the song, one of the Minsk district leaders, while the words “We are waiting for change” could be heard, tried not to turn off the music, but to immediately pull the wires from the speakers. The DJs were immediately arrested, beaten and imprisoned for 10 days, after which they emigrated from Belarus.

The mural painting with DJs in the Square of Change was torn off, painted or resin-coated more than ten times. At first it was done by public service workers, then by people in black without identification marks. A simple, grey transformer cabin had become a battlefield for the right to dispose of one’s own yard. It was also a symbol even when the wall became a black square after the mural was painted over, being surrounded by armed people and protected from the inhabitants of the yard. In November, unidentified people detained and killed Roman Bondarenko, a resident and artist of the Square of Change, because he dared to ask the question: “Who are you and why are you overpainting a mural?”. A few weeks later, an independent investigation revealed that Dzmitry Baskau, head of the Belarusian Hockey Federation, Dmitry Shakuta, a kickboxer, and Lukashenko’s spokeswoman Natalya Eismont could be responsible. After the murder of Roman Bondarenko, the Square of Change became a place of remembrance where tens of thousands of people carried flowers and candles. A few weeks later, special forces brutally dispersed the rally, and the memorial site was destroyed. All day they hunted for the people. The yard dwellers had hidden in their apartments to prevent them from being beaten and detained. An ordinary courtyard had become a model for events in Belarus – a peaceful and open mass protest against people in black clothes with completely or partially hidden faces that could detain or even kill you on the question “Who are you?”

This object and exhibition is dedicated to the residents of the Square of Change and the entire Belarusian people, thousands of prisoners, 40 thousand people who have gone through Belarusian prisons in the last 8 months.

In the context of the exhibition, additional events will be organized. Please follow the programme!

7 June 6pm – we invite Belarusian people who have experienced the events at the original square in Minsk to the square in Riga. The event will be broadcasted live on our Facebook page.